First of  all, we are not paid by Air New Zealand for this article. We just had a great experience and thought it was worth sharing it. If every airline was working this hard to offer a good service, flying would be way more pleasant. This being said…

We knew our flight from Vancouver to Rarotonga (Cook Islands) would be a long one. I personally had never flew for more than 5 hours straight so when I saw that Rarotonga was between 16h and 18h of transportation, I was a little shocked. And scared. And excited. But mainly excited!

See, this is the first time we are traveling without the kids. This year is our 10th year anniversary and we decided to book a vacation just for the two of us. Yes! Just us two!!! So even if this long flight was not the most appealing part of the trip, we thought that without kids, it would be so easy. And it was.

Our first flight was from Vancouver to Los Angeles with Air Canada. It was a 3 hour flight and I’m sorry Air Canada but, I cannot say it was great. I wish I could give a nice review of our country’s airline but I just can’t. The main goal was fulfilled: we arrived at destination safely. But is it bad to expect just a little bit more in terms of service and comfort? Here’s what I’ll remember from my flight:

– Of course, they didn’t serve anything to eat. It’s been a few years now that we don’t expect any food when flying with AC. Only water, juice, coffee or tea right? Where are the peanuts and pretzels?! Those were already not a lot but at least it was something.

– It was a flight with wifi which I was very looking forward to. Turns out you have to pay if you want to use it… Never mind, I’ll just watch something on the little TV then..

– At least, the flight attendants were very nice, the flight was on time, the little TVs had a good selection of entertainment. I mean, it’s not all bad. It’s just not great…

But then we landed in LA and 2 hours later, we took our second flight which was with Air New Zealand.

Now before you say anything, I know that I’m comparing an international flight with a “canada-us” flight. And I understand that the longer flight should be more comfortable than the shorter one BUT should the difference be so enormous? Tell me what you think in a comment below.

With Air New Zealand, we had a 10h flight from 11:30 PM to 6:30 AM (local time). So basically all night. Well because I’m so used to travelling with Air Canada (and Westjet, both companies are very similar in my opinion!) I wasn’t expecting a meal since the flight was after dinner time and it was landing just before breakfast. I was hoping for peanuts or some sort of snack. Well, they surprised me:

– Not only was there a meal, but there were two! A dinner at first and later a breakfast. And it was not “ok food,” it was delicious. For dinner, we had two options: beef or chicken with potatoes, vegetables, a salad, bread and butter, crackers and a piece of cake! I don’t know about you but that’s a pretty nice meal to me! Breakfast was an omelet with potatoes or fruits with muffin and yogurt. Yummy! On top of it, when they are serving the meals, they are very efficient and you don’t wait very long to receive your plate. They have everything ready so you tell them your choice and they hand you your meal. Someone else follows with the drinks.

– And by drinks, I mean wine. Two choices of red or white. And they are New Zealand wines, obviously 😉 Moreover, they do a second service of wine about 30 minutes later.

– When you get in the plane, on each seat is a blanket (a nice long and warm one) and a pair of headphones (again, nice ones). I regretted my purchase in the previous plane.

– The TV offers a nice selection of movies and TV shows but there’s more to it. You know that little map that shows you where the plane is? This one is a Google Satellite view and you can navigate in the map. I really like maps so I thought it was a cool feature.

– The TV also gives you access to the weather forecast of your destination, a trip advisor app with many suggestions of what to do on your vacation, you can “share your screen” with the person next to you if you wanna watch the same show, you can chat with a passenger just by entering his seat number if you are not sitting next to each other, etc.

In the end, our flight was long but it went by fast. We had dinner, then watch a movie, tried to sleep for an hour or two, watch 2 or 3 shows, then breakfast was served and just before landing, watched 1 or 2 episodes of Friends and we were landing! We keep a good memory of our experience and we are very happy to fly with Air New Zealand when we’ll return.

In the mean time, I guess we’ll have to enjoy the sun and get back to you soon with more details on Rarotonga. This small island seems to have a lot to offer. I can’t wait to discover its’ land and sea and tell you all about it. 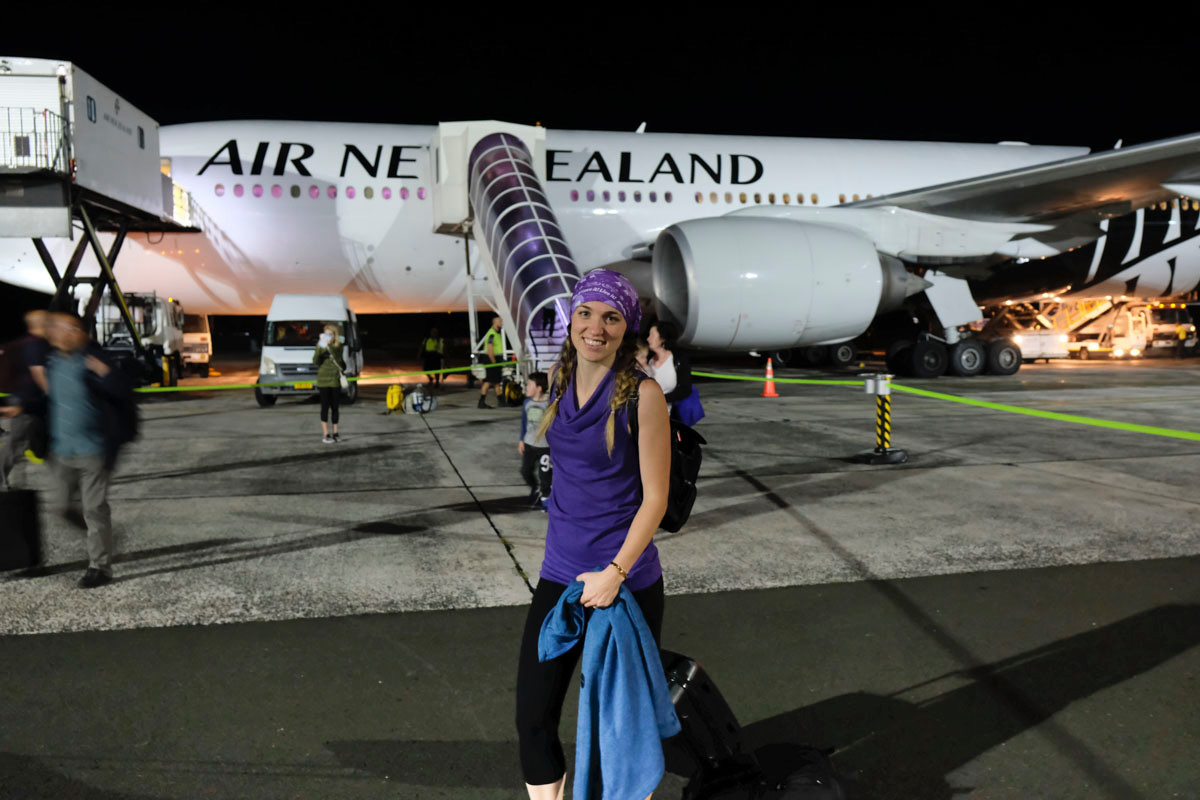